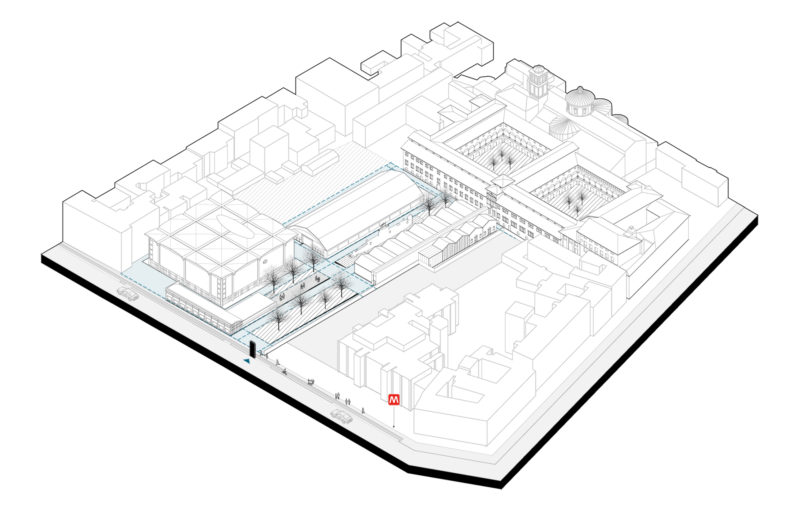 Over twenty years of collaborations within one of the most important institution in Italy: a modernization project based on renovation, addition and enhance of its existing potential.

For Milan, the Museum of Science and Technology is an integral part of the city: one of the most important such institutions in Italy, as well as being the Museum with the most visitors in Lombardy, it is a complex covering an area of 50,000 m2made up of various pavilions which have become stratified over time. The main body is a 16th-century building that was once home to the Monastery of the Olivetans up until the end of the 18thcentury, then added to by the Austrian spaces of the Cavallerizze, destroyed in part during the bombings of 1943; and the Aeronaval Pavilion, facing onto the road, an industrial building without any particular architectural merit; the Railway Pavilion and the Toti submarine.

Intervening on a site of such historical importance calls for in-depth knowledge; the architect Cipelletti has had the chance to familiarise the venue since 2004, when he curated a display of workshops of Robotics and Biotechnology together with the architect Marco Albini and later, again with Studio Albini, the display on Telecommunications. This collaboration made it possible to develop a certain sensitivity for the museum environment which then led to his designs for the Scala dei Chiostri (Cloister Stairs), produced by Cipelletti as part of the AR.CH.IT studio, in 2011: the result was a superlight staircase which valorises the pre-existent elements while meeting the fire safety norms and granting the public access to a new section of the Museum. At the same time, the Cavallerizze project got underway, financed by the Ministry of Cultural Heritage, making it necessary to re-plan the entrance to the Museum and house some of the public service areas as well as new exhibition spaces. The restructuring of the Cavallerizze underwent a long elaboration process which came to an end in 2016.

During this intervention, the need emerged to requalify the monumental building in order to address the existing problems of primary circulation – the great gallery passageways and the vertical connections – with the aim of creating a better valorised, homogeneous building, in respect of fire safety norms, easy to move around, with innovative architectonic and museographical solutions, and guided by an idea of art and architecture which foresaw the involvement of the artist David Tremlett. The first phase of the Primary Circulation project was carried out in 2016.

On the basis of the knowledge acquired by Cipelletti of the reality of the Museum and the positive results brought about by the interventions made, in 2017 the studio AR.CH.IT was commissioned to come up with a Masterplan, currently underway, of the entire museum which – on a philological basis of simplification, as was the case with the project for the Cavallerizze – will guide a change designed to reorganise the external spaces and make the Museum a more accessible and inclusive system, reducing physical barriers and regaining complete serviceability and quality of both the exhibition spaces and the service areas.

This study led to the elaboration of specific projects on the unresolved areas, such as the addition of pavilions, public services and the redevelopment of the external areas, with a green space project interfacing with the activities of the Science Museum itself, thus providing better integration with the urban context.

The common thread to these projects by the architect Cipelletti is the belief that when faced with stratified realities such as that of the Science Museum, a contemporary intervention must know how to fit in harmoniously with the existing elements, blending together what we might define as geological eras.