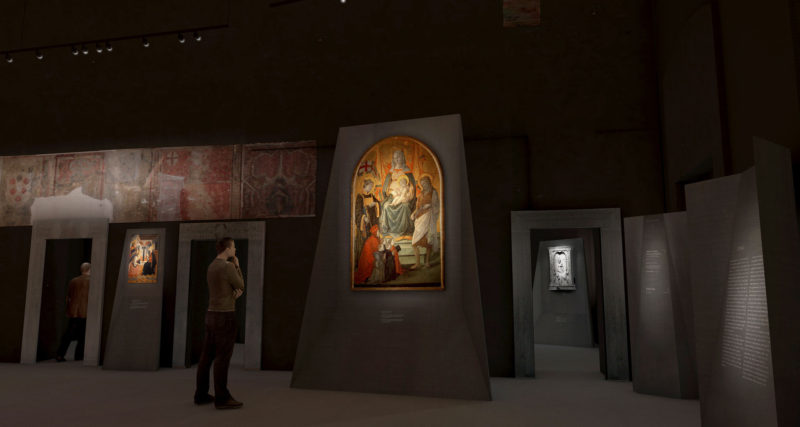 An exhibition is an hybrid experience between architecture and entertainment but also a journey through space and time, and in the case of the Museo Civico di Prato this journey begins in the Late Gothic era until arriving to present day. The designed stages of this journey have taken into account a direction that would enhance, along with works, architecture and lighting, all the elements able to surprise and revive the curiosity of the visitor. The lighting was designed in continuous relation with the works, their mounting and architecture, by following the order of a succession of floors that would make the visitor live an ascensional experience from intimate to collective.

The theme of the ascent is developed starting from the first floor where the works float in the dark. The windows are darkened, and the lighting of the altar pieces is studied from the bottom up in a visual relationship similar to what you could experience when entering churches.  A fundamental aspect is the change of lighting on the works that, from the early Renaissance onwards, is downward. The exhibition layout is on a diagonal, which we will see again in the architectural theme of the upper rooms.

On the second floor, the lighting panels diffuse a white, dynamic light. Even in this case the museological layout is set on a diagonal that makes the visitor first perceive the architectural layout of the room and then gradually reveals the works, thus, in the end, creating a reverse shot effect just like in an ancient artist’s studio.

At the opening of the landscape on the third floor, there is the transparency and power of sunlight. The exhibition elements brighten until they are white and merge with the light and the room. A white wall on a diagonal divides the room in two parts: on one side, a collection of Bartolini envelopes that, at eye level and independent supports, observe visitors and provide a dramatic effect of great impact; on the other side, a more protected atmosphere accompanies the visitor in the exhibit of nineteenth and twentieth century paintings. A downward ramp follows the wall and solves the problem of architectural barriers favouring interesting points of view on the works and the city.

In general, the theme of the diagonal and the polarization on the most important works favors a path order also in the smaller rooms that otherwise would have been dispersed.