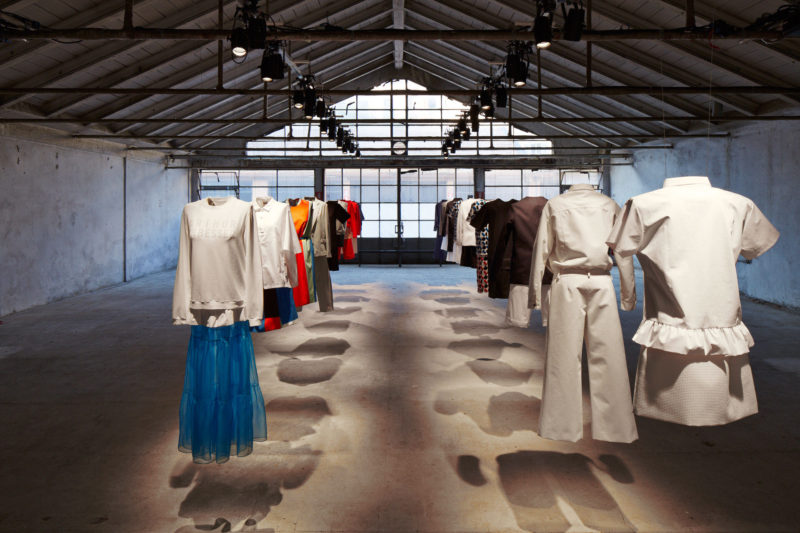 “This artistic coupling is tough to execute because it requires designer and artist to be kindred spirits in using colour, texture – and imagination. Valsecchi art and Arbesser’s fashion, curated by Cipelletti, seemed a perfect fit”. (Suzy Menkes, VOGUE)

Arthur Arbesser continues his quest for an alternative and original way of presenting his philosophy of fashion. Last season’s partnership with the architect Luca Cipelletti continues, but the private, intimate atmosphere of the previous collection has been left behind and replaced by an encounter with the city – the 5Vie district and the industrial archeology of Garage Sanremo.

In the first part of the show, Arbesser and Cipelletti converse with the artist Carlo Valsecchi (born in Brescia, 1965). They all see exhibition as a tribute to Walter Keller in an imaginary gallery that will be open for six hours only. Featured works will come from important private collections and will previously have been displayed in institutions such as MART in Trento, GAMEC in Bergamo and the Musée de l’Elysée in Lausanne. The collaboration between the designer and the artist takes an unexpected path.

However, Valsecchi’s works are not the inspiration for Arbesser’s clothes:the two worlds exist independently, but a shared sensibility sets up a relationship between them. A dialogue between art and fashion emerges that is also a meeting of kindred spirits. Are the models who wear Arthur Arbesser’s 2015 spring summer collection simply spectators of the show or are they part of the installation?

In the next room – a large open space – the form of the fashion presentation undergoes a conceptual reversal. The logic of the show and the catwalk is turned upside-down, setting up a conspiratorial dialogue between the designer and the visitor. The terms of this exchange become evident in the still-frame of the final exit showing all the pieces in the collection. It is a conception visualised and developed by Cipelletti by thinking about the role taken by Arbesser – an emerging designer who has found his own way to work with the dialogue between art and architecture.