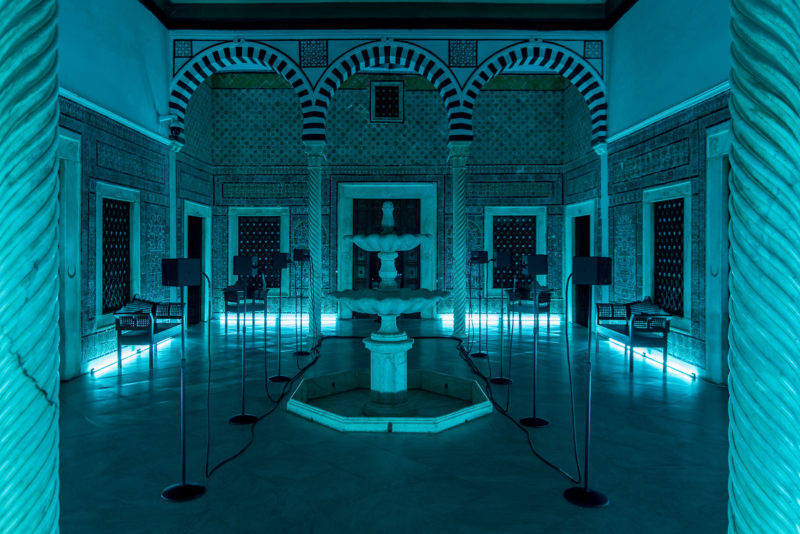 A soundscape of the Mediterranean basin, composed by retracing Ulysses’ journey from Troy to Ithaca. A vastness of fragments songs harmonies: a choir, an audible entropy.
Sailing for over two months across the coasts of the Middle East, Italy, Northern Africa and Southern Europe, equipped with scanners, aerial antennae and recorders, Soundwalk Collective intercepted a technological, augmented hearing, accidental overlaps of noises, music and voices, private conversations and service communications, bouncing back and forth between boats, ships and the coast.
They listened to these recordings again in their studio, in order to grasp the sense of each sound, of each trace, of each diaphony: hints of stories, slices of worlds, letting themselves be led to what turned out to be an état des lieux of the Mediterranean basin.
The result is a musical map in continuous rearrangement, a polyphonic installation, the reflection of a sound archive. 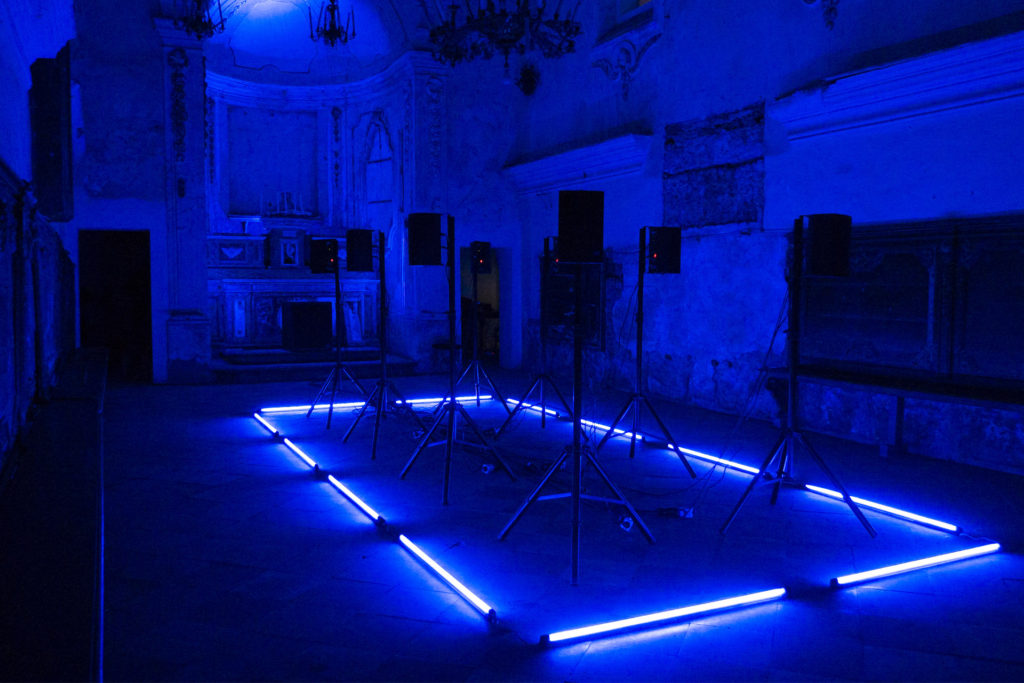 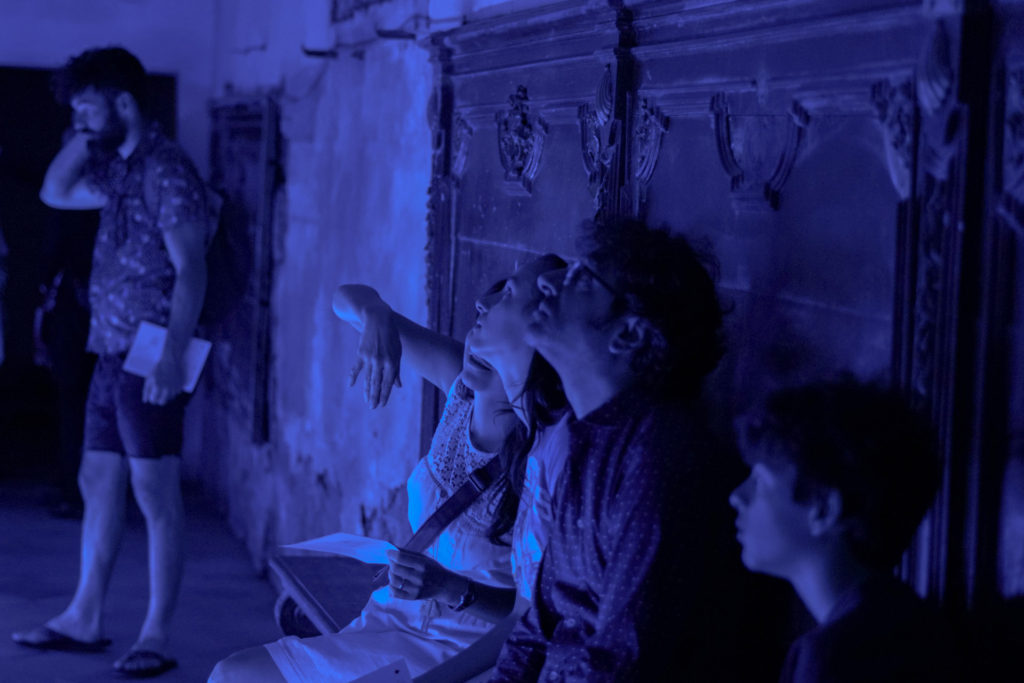 In Palermo, this symphonic drift of the Mediterranean basin finds its home at the former Oratorio di Santa Maria del Sabato, whose walls echo just as many vicissitudes. The choral dimension of the oratory is amplified by the exhibition set up, which welcomes the visitors in
a dense, suspended dimension, one which weakens the sight. A reference to nocturnal sailing, overhearing the sea. Located in Vicolo Meschita (“Alley of the Mosque”), in the ancient Jewish quarter of the city, after the exodus of the Jews of the late 15th century, the oratory became the site of a succession of Catholic congregations, up to its closing ten years ago.

On this occasion, with Ulysses Syndrome and Manifesta, it returns to life, with the echo of the Odyssey, of all odysseys. Announcing its imminent rebirth as a Synagogue, thanks to its recent assignment to the Jewish Community of the city by the Archbishop of Palermo.                      The inaugural date of the exhibition fosters a further resonance. June 16th is the day in which, in 1904, Joyce’s Ulysses took place. The recurrence of the “Bloomsday”, by which the Irish poet – one of the spiritual guides of this project – is celebrated, and whom we celebrate.

“Listening to Ulysses Syndrome (the signs of Ulysses, or the running together of his routes) I hear this displacement of refrains. I am not fixed within signs but adrift within signals. Like a bat or a dolphin, I hear scanned frequencies otherwise inaudible to my human limitations and these voices and tones captured from the aether seem to me to be our equivalent of those voices of gods who spoke “words that flew”; music asserts its regional and cultural affiliations and yet at the same time it drifts unmoored in the ocean of sound. One of the sirens in Joyce’s Ulysses produces a shell, a seahorn, so that one of her customers can listen. “Her ear too is a shell,” wrote Joyce, “the peeping lobe there… the sea they think they hear. Singing. A roar. The blood it is. Souse in the ear sometimes. Well it’s a sea. Corpuscle islands.” Fluting notes, lamentations, disembodied voices, the hum of contemporary existence. What is the figure; which is the ground? From within our corpuscle islands we close our eyes, set out to sea in order to discover exactly this.” 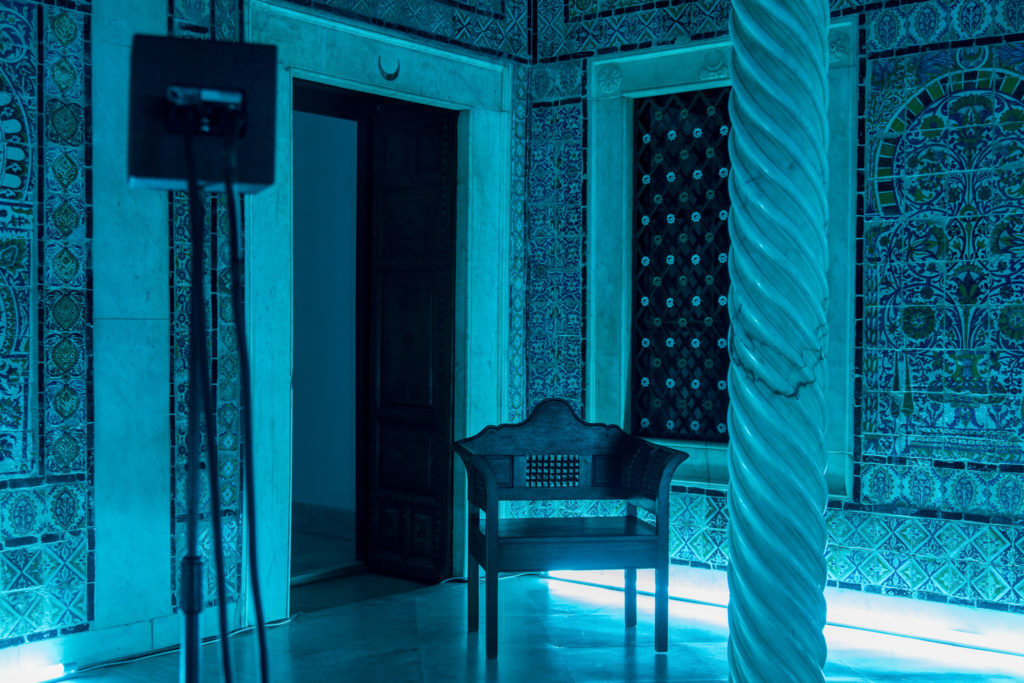 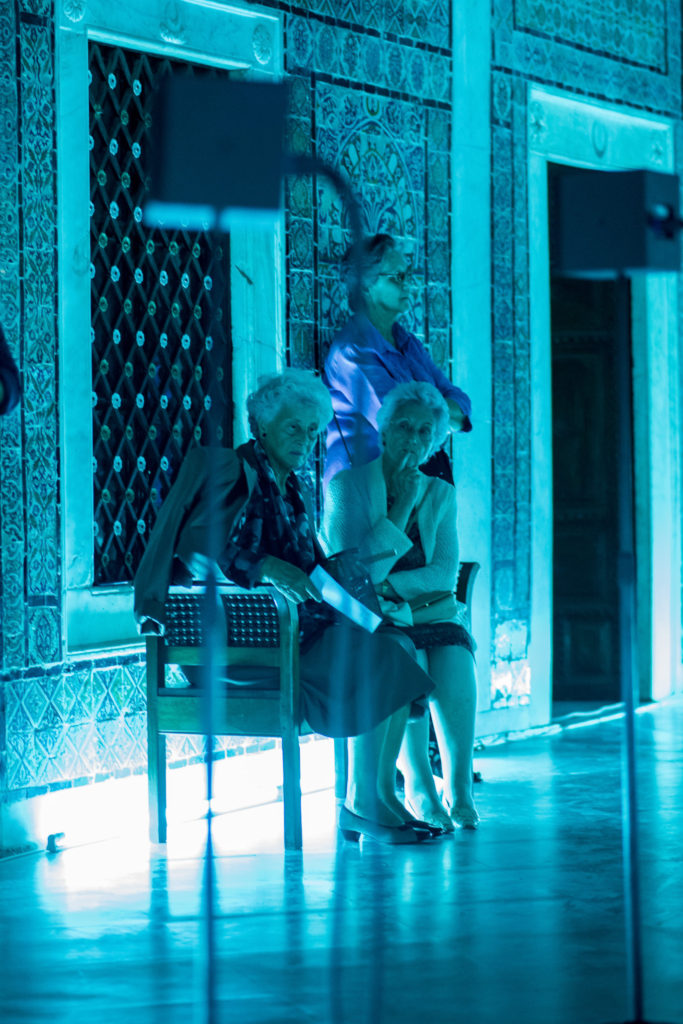