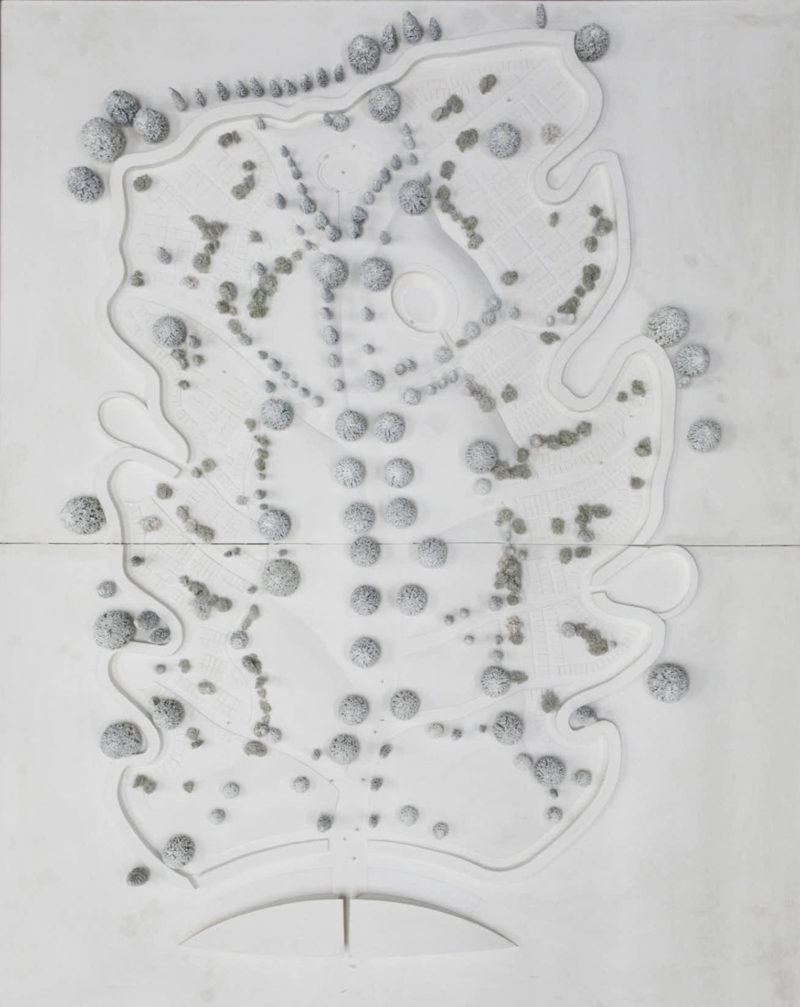 “A garden is sacred, in a way, both a physical entity and an allegorical device. It is many things: symbol, crest and emblem; Arcadia and Eden; Pan and Demeter; prophecy and oracle; a form of heraldry and magic; ritual and spell.” (Lea Vergine – ABITARE N.150)

In the Italian town of Gorgonzola, a truly unique project between art and architecture with the French artists Anne and Patrick Poirier, which aims to rethink the established concept of a cemetery that turns into a garden.

How to imagine a way to give form and substance to a contemporary monument? How to conceive of a collective space that interprets themes and imperatives in clear opposition to the prevailing tendency to consume everything without leaving a trace? What settings can we imagine that would encourage the cultivation of memory, the yearning for silence and a quest for the sacred to enter into a new synthesis? To give form to a site where the desire to spend time in a way that differs from accepted conventions can unfold?

These and related questions, all of which seem to be removed from the ones that architects habitually ask, occur to me every time I consider the Poiriers’ unique, compelling project for a new urban cemetery in Gorgonzola.

At the origin of these questions is the enlightened presence of Massimo Valsecchi, gifted with rare and uncanny insight, ideal patron and promoter of ideas for a small city with an important name and an urban history marked by a clear set of geographical and cultural characteristics.
Over time, Valsecchi has meticulously studied the city and its history, guided by a firm belief in the need to construct a new and powerful landmark. He foresees the form taken by this monument not in terms of some contemporary, brash architecture complicit with the overwhelming banality of the present, but in an ample cemetery that can act as a beacon for the surrounding territory.

Located beyond major infrastructural arteries in a semi-industrial agricultural area, the cemetery occupies a site that in its absence would be almost certainly invaded by unsightly urban sprawl. Through this project the area is given a new destiny and is protected by a intelligent fragment of architecture-in-the-form-of-landscape.

The commission given to the Poiriers – artists able to effectively wield a vision of memory and nature centred on a singular concept of place and an unexpected monumental space – gave rise to the idea of a ‘mission impossible’ that can and should be realized.

“It is a large, imposing building with a cobalt-blue arch marked by an entrance in the centre, the sacred limit between two worlds, but also a place capable of accommodating the silence of prayers and the sacred, whatever it may be!” (Luca Molinari, “Anne e Patrick Poirier, Il giardino della memoria. Progetto per una necropoli contemporanea” – SKIRA2010)

The artists set to work by inscribing into the land the traces of an archetypal and primal dimension. In this project once can discern a quest for a set of signs that are simultaneously radical and recognizable, unforeseen lineaments of a singular organic form.
The initial inscribed figure is that of a large leaf clearly imprinted on the land, child of the earth and the spreading plain of Gorgonzola. This provides an elementary contour that brings together two distinct but intertwined objectives: a geographical landmark à la Google Earth which acts as a foundational act, and a space that could become an inhabitable fragment of a new landscape where nature has the upper hand. This strategy gives life to a uniquely powerful place.
What one discovers in this design is the basic clarity of an ancient gesture and a willingness to move beyond conventional interpretations of the theme of the cemetery. What is at stake, ultimately, in this project is the idea of giving form to a universal setting. This idea presupposes a radical rethinking of a mortuary function which, over the past century – especially in Italy – was stripped of its evocative and cathartic power.

This place of the soul and its corollary, the function of memory is imagined by means of a large archaic outer wall that encloses a garden in the form of a large park, a green labyrinth where one can encounter the unforeseen by navigating the diverse cemetery “islands”. This design strategy fuses the urban idea of the cemetery with two other imaginary ones: the landscape dimension of the pre-Roman necropolises in Italy and the picturesque idea of the cemetery as a park that is part of the Northern-European Romantic tradition. The result is intriguing for a number of reasons, yet above all because it generates, in the cross-contamination of genres, an absolutely novel space reconfiguring the contemporary need to produce urban projects that operate as active fragments of a new landscape.

The entrance, on the other hand, maintains a monumentality that exudes silence. A large imposing building featuring a cobalt-blue arch with a centralized entrance, it marks a threshold between two worlds. In this way it delimits a place capable of accommodating the silence of prayers and engaging the sacred, whatever this may be.

One is curious to know what will become of this courageous idea. If its ideal patrons, and especially its public clients and those who have the wherewithal to invest in this undertaking, have an courage equal to the one displayed by its architects, then it may be possible to witness something truly unique come to life, something with real cultural permanence giving a unique identity to Gorgonzola.

The outline has been traced: only time will tell if the the future can translate this idea into reality.