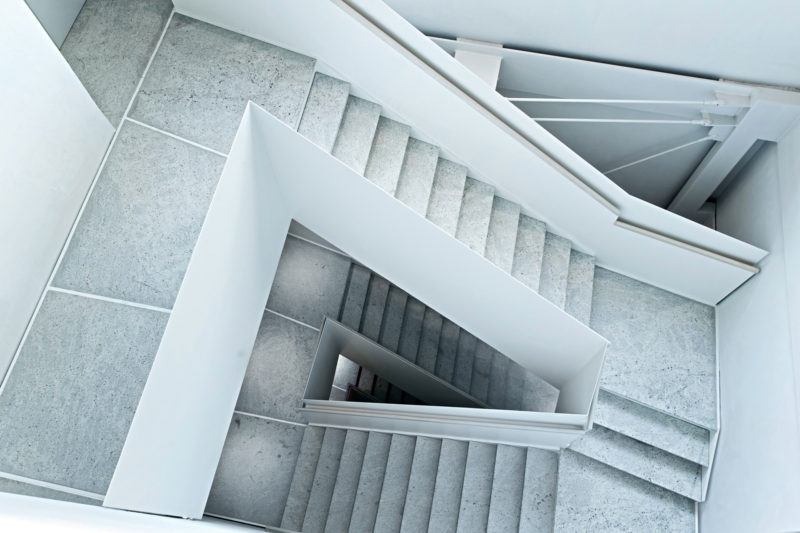 “The project was able to give a new architectural identity to the stair, now perfectly integrated with the pre-existing” (Maria Vittoria Capitanucci, Milano – Le nuove architetture. 2012 SKIRA Editore)

The need of a new emergency staircase gives AR.CH.IT the chance to conceive the project of a light metal stairs, that stands in the space natural light as a white origami.

A half century has passed since the last intervention by the architects Portaluppi and Reggiori in the former Monastery of the Olivetani, a sixteenth-century structure in Milan’s historic center. The Leonardo da Vinci Museum of Science and Technology, one of the most popular tourist destinations in the Lombard capital, is housed in this building. This is also the site of a new architectural project by AR.CH.IT Luca Cipelletti consisting of a light metal staircase, a white iron origami that rises in an area of the museum illuminated by a pre-existing vertical window of ample dimensions.

The chief requirements of Cippelletti’s intervention, which involved a part of the area near the early Christian church of San Vittore al Corpo, were to make the structure comply with the fire code and the provision of a new public entrance for a wing of the Museum.

As a result of discussions with the Direzione Regionale dei Beni Culturali e Paesaggistici of Lombardy, instead of inserting a simple staircase and an elevator to fulfill the requirements of the code, a decision was made to highlight a respect for the historic profile of the building. This led to a solution with a vertical distribution of spaces valorizing existing historical elements.

Examination of the area where the elevator and staircase were to be put showed that that the space with the pre-existing vertical window was not large enough to fit the necessary elements. Moreover, this space was not suitable for another reason: any intervention combining stair and elevator in a single, unified zone would relegate the historic window to the background. Bearing these concerns in mind, the proposed design divided the space into two separate zones, one for the stairwell and the other for the elevator. In this way a large volume was created that could readily accomodate a staircase naturally illuminated by the historic window, thereby allowing the latter to become the protagonist of the intervention.

The ramp near the window is inclined in a way that was determined by the existing apertures in order to have a more dynamic design, increasing the empty area (also the natural light) and taking as a reference the design of the historic building

The project “La Scala dei Chiostri” has been mentioned by the Jury of “Lombardy architecture Under 40 – New Architecture Proposals – Third Edition”, with the following motivation: “Appreciate the structural quality and the meticulous measurement of the details”.