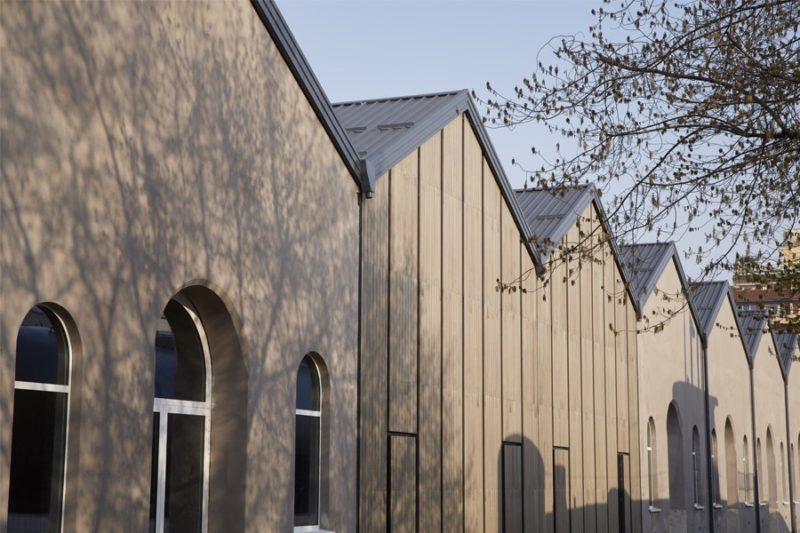 The project consists of a renovation and functional conversion of the old Austrian Stables (le Cavallerizze) within the precints of the Museo Nazionale della Scienza e Tecnologia Leonardo da Vinci in Milan.

“A Darwinian Design. A new passage in the process of this museum’s evolution that has never stopped changing since 1953, the year of its foundation”
(Irene Guzman, ABITARE 553)

The museum complex, which occupies an area of over forty thousand square feet, is centered on the monumental sixteenth-century structure, a monastery that belonged to the order of the Olivetani until the eighteenth century.
In the nineteenth century the monastery was transformed into an Austrian military barracks, and the stables themselves were added in the area of the monastery garden.

During World War II, Allied bombing severely damaged the stables. In the period which witnessed the radical renovation of the monastic complex by the architects Piero Portaluppi, Enrico Agostino Griffini and Ferdinando Reggiori, opened to the public in 1953 as the Museo della Scienza, the stables were left untouched, and sank into a ruinous condition.

The museological transformation of the stables, in addition to being an essential part of exhibition spaces of the Museum, is integrated into the ambitious project that revalorizes the external area that occupies the grounds up to Via Olona.

This is a truly urban scale project that brings about a clearer understanding of the diverse architectural stratifications that have accumulated on the site over centuries. In a more specific sense, the principal aim of the revalorization of the stables is to establish a precise visual and functional relationship between the Museum, the city, and the new metropolitan infrastructure.

This project of historical revalorization has been supervised at every phase of its development by the Segretariato Regionale of the province of Lombardy (previously, the Direzione Regionale per i Beni Culturali e Paesaggistici).

In collaboration with Daniela Lattanzi, in charge for the procedure and the tutelage of the architectural heritage, a dialogue on specifics as well as the overall project has unfolded whose main objective is the best way to reconcile the new design with the need to preserve what remains of the stables, thereby effecting a synthesis of history and the present.

The project, consisting of a linear circulation path made by cutting a section through the original walls of the stables, is organized axially in relation to the monastery building, and more specifically relates to the cruciform shape where the two axes of the building meet. As such it picks up upon the itinerary which provided the main circulation nexus of the historic garden.

The axial relationship with the architecture of the monastery enhances perception of the project from afar, and, in consequence, gives the city a perspectival grasp of the most significant portion of the historic building. The Museum can be entered from Via Olona, connected directly with the main transportation hub of the city via public transport. Here the principal objective was to give the visitor an intuitive understanding of the flux of museum traffic through the complex, with special emphasis on the entryway.

The perspectivally organized route, approximately eighty feet wide and nine feet high, traverses every one of the stables: on one side, it is delimited by a continuous, monolithic sectional cut through the pre-existing wall mass, sealed with a scored plaster and cement surface; on the other side, in the interior of the bridge like space, the exhibition areas are opened within the restored and reconstructed volumes of the stables. The external shell consists of multiple panels of Alucubond, of an anthracite gray hue, fit together.

This material is composed of aluminum strips closely bound to form a resistant surface whose core consists of a high-density thermoplastic. The seemingly brutalist choice of a scored cement interior wall surface has been adopted so to render the idea of architectural subtraction more legible and emphatic, by making the itinerary that runs through the removed wall mass of the stable facades into an ordered and progressive experience.

The technical and mechanical elements were meticulously incorporated into the architectural design: a single planar element, consisting of an extended truss eighty meters long lined with a steel mesh, crosses the stables, providing space for a number of services including air conditioning, the electrical system, fireproofing and lighting elements.

Regarding the preservation of the historic building, the primary objective was to highlight the elements of the original structure that needed to be preserved such as the large arched windows, the lunettes, the roof system made up of wooden trusses and more generally the architectural typology distinguished by its ordered and modular system.Two of the best preserved stables, which were only superficially renovated in the 1950s, were used initially as grain storage units and then as storage for the Museum. These were the only ones to be kept in the final structure; all that was required was to strengthen the existing wooden trusses and their stone supports, while it proved necessary to restore the wood elements, replace the roof envelope, and re-open the large lunettes above the portal arches.

Regarding the four stables near Via Olona, only small portions of the original doorways and windows survived the Allied attacks. In fact, this part of the site was never restored or reduced in size after a real estate acquisition in that area. Here the volumes were rebuilt following the proportions of the original architecture and its materials; the structure was redesigned in metal but maintained the same original position, the brickwalls have been preserved and are integrated seamlessly to make their bond optimally legible.

In this way the historical and material stratification becomes clearly visible. In the central area, which originally was a huge empty area, a larger and multifunctional space has been planned. The volumetric ordering of the stables was rebuilt, filling the gap with two contiguous rooms supported by a linear structure of metal pillars following the position of the wall that once separated the two environments.

To enclose the missing facades of the envelope in this area, an ample metal structure equipped with a bamboo skin was added: the panels, manufactured by extrusion and easily replaceable, are assembled from a composite of polymer and bamboo, a eco-friendly revetment with performance characteristics that make it particularly suitable for outdoor use.

The vertical structure alternates the bamboo with glazed apertures of 12 centimeters throughout the entire height of the facade, marking the position of the “arcarecci” and the joints in the concrete floor. Natural light filters through these panels facing south in such a way as not to interfere with exhibition functions but designing on the floor a sundial aligned with the project. Corresponding to the central space, a new basement, about five hundred square meters, has been created providing space with a storage function for the Museum.

The new roof for the stables is equipped with a self-supporting metal sheet. This is effectively insulated and sound-proof, anthracite-colored on the outside, to match the plaster used for the facades and the Alucobond, light gray on the inside to match the metal structures, window and door frames painted in white. Outside, the dark colors and materials are integrated with the context, which includes Toti, the historic submarine on permanent display, and the metal structure of the railway pavilion. Inside, the new carpentry work painted in white and the light gray of the concrete leave the warm tones of bricks as the prevailing color.

The choice of a grayscale palette for the entire project differentiates, even as it permits a co-existence of, the historical architecture with the contemporary project. As for the floor, neither the historical analysis, nor the excavations or the stratigraphic investigations, revealed any specific pre-existing typology.