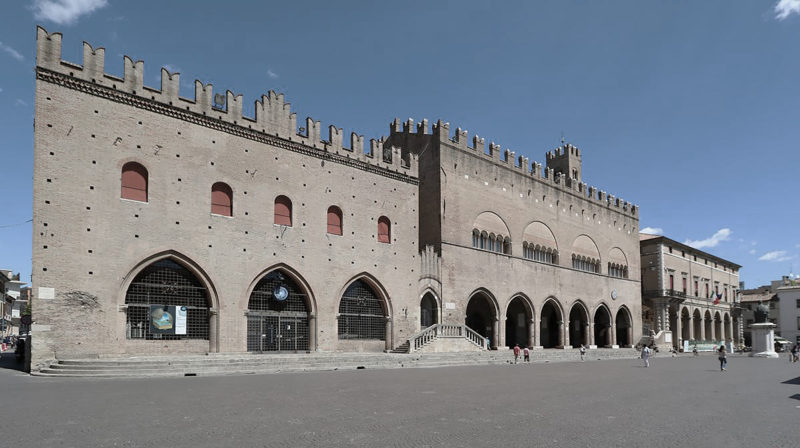 The fascinating museographical challenge of a new contemporary art collection displayed inside two medieval treasures to be restored in the town centre of Rimini.

An opportunity to reconsider the dialogue between art and architecture, between past and present. With the aim of involving new audiences.

On one hand a small and affluent town, steeped in history and culture with millions of tourists every year, strongly motivated by a new vocation towards contemporary art to broaden its cultural offer, and keen to recoup two medieval buildings – highly representative from a historical and civic point of view – as part of this vision. A town without its own collection and on the lookout for original contents to display. On the other hand, the rehabilitation community of San Patrignano, only a few miles away, supported by a Foundation which has recently begun to collect contemporary artworks to support its own projects, thanks to numerous donations by collectors, gallerists and even artists themselves, in search of a representative place in which to display the works on a permanent basis.

Both the protagonists of this extraordinary joint venture, which meets the reciprocal needs in an innovative and satisfying manner, have a strong common denominator. For both, the principle of the valorisation of both the contents and the container, of both history and contemporaneity is of utmost importance. In keeping with a vision in which contemporary art offers us the keys with which to interpret our era, and in the dialogue between past and future, above all in Italy, also the extraordinary potential of an identity which, being forged by the solidity of memory, may guide us towards a more self-aware future if nothing else. The relationship between a historical container and a contemporary art collection thus lies at the heart of a challenge for a museographical project which aims to reach out to a vast and diverse audience.

Firstly, the two containers: the 13th-century Palazzo dell’Arengo and the 14th-century Palazzo del Podestà, for centuries the institutional space of public life, today lie in a state of  deterioration due to a process of ‘normalisation’ which has managed to obscure all its elements of merit. In agreement with the Superintendency and the City Council of Rimini, the decision was made to halt this typically Italian process, avoiding the historicisation of a series of macroscopic errors which will be removed, while instead following the principle of the valorisation of medieval buildings with a discreet and contemporary approach that, while avoiding historical falsehoods, will allow for the reading of a new stratification, one which will remain fully reversible.

The aim is to restore the awe-inspiring perception of the huge medieval architectural volumes and bring back to light all its valuable historical elements, such as the endless sequence of Palladian trusses and the elegant polifore. But the aim is also to be able to house a contemporary art collection in a careful and rigorous manner, at the same time casting an outward gaze through a form of museum communication which is open, outgoing and suited to the context.

As for the contents: a prestigious collection but one by nature nonhomogeneous, having been formed by highly diverse donations, and for this reason deliberately free of any strict scientific boundaries. And this gives rise to the ensuing difficulty of finding that common thread necessary for a collection that must also be flexible and ready to welcome further acts of solidarity over time that will go on to increase its value and its intrinsic relations.

Both the container and the contents would appear to have major underlying issues for any hypothetical dialogue; however, it’s these very difficulties that must be transformed into an opportunity in which their extraordinary nature and the limitations of each may achieve a synthesis and reciprocity in their dialogue and in their mutual valorisation.

The architectural/museographical project will steer clear of an excessively rigid or over-constructed display setup: the ‘box within the box’, or the easy spectacular value of an ephemeral exhibition sub-container. The more the container is valorised in terms of its own historical components, the more the dialogue between past and present may afford openness and freedom in the positioning of the contemporary works, in a constant and natural dialogue between them and the space, seeking an equilibrium in which all the components play their own role, without any excesses of protagonism.

The aim is to foster dialogue between the works on show and a reappraised monumental and museum dimension of the architecture housing it, attempting to pay homage to the most consolidated Italian museographical tradition of the great masters who undertook the reconstruction of the country’s Civic Museums in the wake of WWII: almost a moral duty in a country like ours, so rich as it is in history, and which must also come face to face with the contemporary sphere. The project will restore a historical symbol to citizens, with new, forward-looking contents, in the attempt to speak to all. Also thanks to the contribution of further ‘conversations’ with young artists who, instead of donating a work, enthusiastically took up the invitation to create site-specific works that will be contextualised as part of a more far-reaching project. In a renewed dialogue between artists and architects which may learn lessons and benefit from our glorious past in order to project us into the future in the far-sighted attempt to find a new form of dialogue between past and present, between art and architecture. Thereby, starting from Rimini, the project aims to question once again the relationship between art and its audience, which is also the message handed down to us by Gillo Dorfles in some of his last writings, with regard to this exciting new challenge.